What Is the NES miHealth?

As powerful as the Infoceuticals are for deep, corrective work, we needed something different to help people with physical issues.

After all, I needed help with pain personally, and hundreds of millions of people around the world struggle with it.

As you may know, many of the world’s best solutions come about because someone has invented something for him or herself, as nothing else really addressed the problem they were having.

And at the time, I had yet to find something that addressed my back pain, so I needed to invent something new.

I didn’t want to just create a variation on things that existed. I wanted to take what we had learned in our first 10 years as a company and go beyond what anyone was doing.

The miHealth is born

This quest led us to the miHealth, a handheld bioelectric device that works both on-body and off-body to stimulate profound results in the body.

It works incredibly well on pain, but can also support a wide range of different areas of health.

Because it’s not a consumable, it can be used on a daily basis for years, helping with things as they come up.

And while it can be used perfectly well on its own, it’s also designed for use with our software assessment, combining the immediate work of the miHealth with the deeper, corrective work of the Infoceuticals; the software also indicates more precise settings to use on the miHealth. How the miHealth works

Though the miHealth looks like a simple device, it is anything but. It’s a complex piece of equipment filled with dozens of functions. That said, we have made it easy to use.

Understanding how it works takes a little background on other bioelectric devices.

This technology has also been used for decades and is still used by hospitals today.

But in my opinion, there’s a self-serving interest as to why they would use it, as I’ll explain in a moment.

This will sound odd, but TENS devices basically work by beating up your nervous system. Using electrodes on the skin, they send electrical signals into the body to interact with nerves that are signaling pain.

TENS devices take what I would call a destructive approach—they just keep sending signals until they wear out the nerves, which in turn stop sending pain signals to the brain. True to the conventional medical approach, the device does nothing to solve the underlying problem.

But it can, for a little while, mask pain by exhausting the nerves.

Since the results don’t last that long, you can see why I feel this therapy is self-serving in a hospital setting.

SCENAR is another technology that took the TENS concept and added biofeedback, which completely changed the game. SCENAR stands for “self-controlled energo-neuro adaptive regulation.”

First developed by the Russians to keep their cosmonauts healthy in space, SCENAR devices interact with the nervous system and “adapt” their electrical signals based on real-time feedback from the nervous system.

Rather than continuing to pound the nerves with a frequency and tiring them out like a TENS unit does, SCENAR acts as a stimulant by constantly changing its signals.

This is important because the nervous system plays a primary role in the body’s communication. It’s involved not only with pain, but also with digestion, respiration, circulation, and much more.

Given its effect on the nervous system, you can understand why there are countless case studies on SCENAR’s effectiveness for all these areas.

When I was exploring solutions for our company, I loved the idea and impact of SCENAR, but I wanted to take it to the next level.

SCENAR works with a limited set of frequencies that can interact with the nervous system, which enables communication, but not the precise level of communication I wanted us to achieve.

Using a concept called global scaling, we developed the miHealth to communicate in a way that’s similar to the SCENAR process, but much deeper.

Continually speaking with the nervous system and switching frequencies many times every second, miHealth adjusts to very precise needs, rather than to the general needs that SCENAR can handle.

But that isn’t all that miHealth does. Yes, using electrodes on the body, it can act as the world’s most precise SCENAR system. But I also took inspiration from another established technology and modified it for our purposes.

PEMF stands for “pulsed electromagnetic frequencies” and represents a technology that has been around for decades.

This allows it to be used “off body” as well, affecting the body through fields in addition to the on-body electrical stimulation.

As mentioned, it doesn’t require electrodes in contact with the body to work. It affects the body through the air by generating electromagnetic fields that interact with the human body-field.

PEMF is known to support:

And with all due respect to traditional PEMF, we used the underlying technology but took an alternate approach.

Despite the fact that PEMF boasts impressive results, I’m not convinced that blasting the body-field with strong EMFs has no downside. There’s even a debate in the PEMF community about whether to use strong or weak fields.

Either way, there are definitely those with EMF sensitivities who should not be exposed to strong fields like that. miHealth sidesteps this issue. In fact, if you used an EMF reader to detect the electromagnetic fields coming from the miHealth, you likely wouldn’t find any.

This is why many people are comfortable keeping it running in their pocket or on their desk beside them much of the day, as it’s effective within a couple feet of the body. (Normally, if something has detectable EMFs, like a cell phone does, we advise keeping it as far from your body as possible when not in use. PEMF devices may be an exception, but again, miHealth simply avoids this.)

We’ve designed miHealth this way because we believe the body-field doesn’t need to be swamped by magnetic fields. It needs corrective information, just as we’ve talked about in previous chapters. And because we’ve based our entire business on this concept, this is where we excel.

So with the miHealth, we don’t use a strong PEMF with set frequencies. Instead, we use a subtle and safe PEMF to simply carry information to the body. And with our expertise in developing mathematical codes that speak to the body-field in specific ways, we’re able to program many functionalities into the miHealth.

How can you use the miHealth?

Since miHealth works whether it’s touching your body or not, it can be used while you’re sleeping, watching TV, working at a desk, and so on.

When it’s off body, you benefit from the PEMF-based information correction for your body-field.

But the PEMF technology is also at work when you’re using the electrodes (the improved SCENAR technology) on body.

In other words, when it’s used on body, you get the benefits of both.

Think about this: restoring one’s energy for life means charging the body battery and improving the body’s control system.

With the miHealth, you literally introduce electrons into your body battery when you use the electrodes on your skin. You are helping to charge the body battery.

And whether you use it on body or off body, you are helping to improve the body’s control system.

The miHealth can literally help with both sides of the equation! 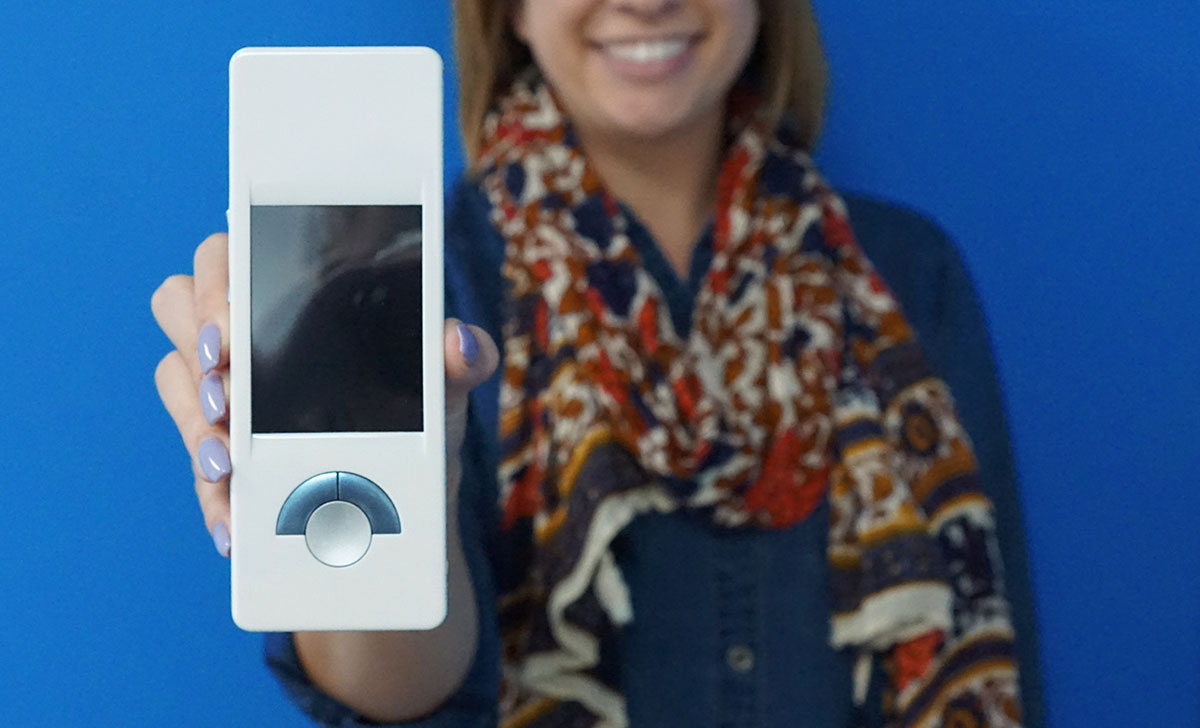